Scotland says NO to independence

The results of the Scottish referendum started to come in in the early hours of the morning, giving the Better Together campaign a slight advantage over the independence supporters. 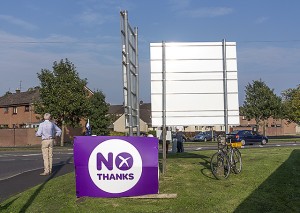 The final result of yesterday’s referendum is a 44.7% to the YES against a 55.3% of the votes to the winning NO, meaning that Scotland has opted to stay in the United Kingdom and to not break the 300 year old union of the two kingdoms.

The winning NO was supported by an overwhelming 73% of pensioners and 57% of people older than 55 years old. This means that most of the young and middle aged population voted for the YES to the independence, specially new 16 and 17 year old voters, who gave the YES a support of the 71%. (Data credit: The Guardian)

Knowing this, David Cameron’s declarations outside the 10 Downing Street today saying that he is delighted that Scotland remains part of the United Kingdom and that the results settle the debate “for a lifetime”, sounds a bit too wishful thinking seeing that most part of the Scotland’s youth favors the split from the UK.

For the time being, England can breathe at ease knowing that the Union Jack flag will remain as we know it today for a long time.

Better Together, david cameron, independence, Scotland, YES
Recommended stories you may like: