Album of the Week 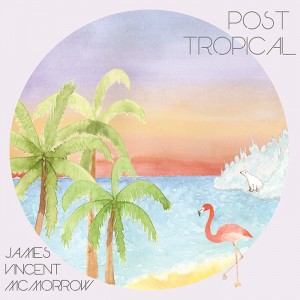 James Vincent McMorrow isn’t your typical top 40 household name, but that doesn’t make him any less brilliant. After his debut album ‘Early in the Morning’ released in 2011 and 2012 EP ‘We Don’t Eat’, he seems to have strayed away from his usual acoustic, indie-folk tones, and towards a R’n’B and soul infused sound, but his ability to stir hearts with his poetic lyrics remains strong in his new album, ‘Post Tropical’.  McMorrow leaves a touch of his haunting past in ‘Cavalier’, singing “I remember my first love” to a background of soulful claps and, near the end of the song, an intense climax of trumpets and drums, which fades into a soft harmony of “oh-woahs”.

The harmonising continues into ‘All Points’ and ‘The Lakes’, where a surprising appearance of mandolins create a tropical feel to the tune, fittingly appropriate to the album’s title. More trumpets and drums lead ‘Gold’, a fast paced song that leans more towards jazz than soul or R’n’B.

McMorrow continues to show off his R’n’B side in ‘Red Dust’, with a fast beat, electronic drum, and a repetitive “Sometimes my hands they don’t feel like my own/ I need someone to love, I need someone to hold.”

‘Look Out’ and ‘Repeating’ demonstrate the transaction of James Vincent McMorrow’s music away from a Mumford and Sons-esque genre, and instead towards a comforting, magnificent mix of James Blake and Bon Iver.

The albums’s namesake, ‘Post Tropical’ is an intense combination of mandolins, drums, harmonisers, trumpets, and hand claps all in one song that, along with McMorrow’s soft, heartbroken voice, create a whirlwind of emotions which continues into ‘Glacier’. The album comes to an end with ‘Outside Digging’, a dramatic change from the two previous songs with its soft organ tunes and long instrumental pauses, at some points resembling ‘Higher Love’.

The Dublin-based red-bearded singer/songwriter made the right decision jumping through music genres and not buckling himself into heartbroken folk, and the birth of ‘Post Tropical’ is the living proof of that.

You can preview the album here: