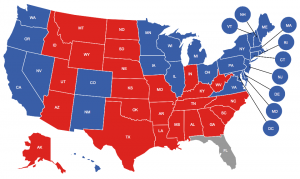 Around 04.20am GMT, Ohio was confirmed as a Democratic state. This was the state that ensured Barack Obama’s return to the White House, for another four year tenure.

In what was billed as an incredibly tight election, for periods of the night it did follow this narrative. All whom predicted a close election put emphasis on the results of Ohio and Florida, and they were clearly right to do so.

Romney burst into an early 30 vote lead, with the first states results being projected at around 12.30am GMT. However, none of these Republican victories were a surprise – they were mainly Republican states from 2008, apart from Indiana, which was strongly tipped to be moving away from Obama in this election. In fact, the only other state that had previously been Democratic that moved to the Republicans was North Carolina.

However, news shortly after 1am confirmed that Obama and the Democrats were still in the competition, with a surge in Electoral College votes placing him in a 64-56 lead. One key hold for the Democratic Party came around 2.30am. Pennsylvania, which holds 20 Electoral votes, remained with Obama.

This state had been one which Romney had been keen to take hold of; it appeared at this point that the swing states were all swinging towards the Democrats. The New York Times predicted that at this stage, the Republicans had 9 combinations of results which could lead them to the White House, compared with over 100 Democratic ones.

The two parties were particularly close in terms of Electoral College votes until 4am, when the Californian vote, which traditionally is a Democratic stronghold, arrived. Along with California, Washington, Hawaii and Iowa all were projected Obama victories. This pushed Obama into a huge lead of 250 to 203 (the Republicans and Romney had projected victories for Idaho, North Carolina and Missouri to ensure the lead at this point was not too great).

At 04:16, the BBC footage cut to the Democratic Headquarters in Chicago, where the jubilant mood suggested that they believed they had triumphed. This was because MSNBC was reporting that Ohio was a Democratic victory. This combined with the confirmation of a projection of Democratic victory in Oregon.

The Ohio result was confirmed around five minutes later, confirming that Barack Obama had reached and surpassed the golden number of 270 Electoral College votes. After 85% of the precincts had counted their votes, President Obama had only 1% more of the vote than Mitt Romney. As the joy seen in Chicago continued, it was announced that Obama had also taken Nevada and Colorado, pushing his vote number to 290. These were, in effect, by-the-by.

Whilst the euphoria settles in to those Obama supporters, the realisation that four more years of a Democratic President and Senate, and a Republican House (at latest projection, the GOP are well on their way to retaining control of the House). One aspect of the last four years of US politics had been the repeated rejection of legislature by the Republican House. This obstacle has not been removed simply by re-electing Barack Obama.

Another issue is the fact that Romney slightly edged the popular vote, meaning that more people overall actually voted Romney than Obama. This could prove divisive in the development of politics in the House and the Senate. At the time of writing, Florida still has not been confirmed as Republican or Democrat (not that this will change the Presidential election). It has been speculated that this state would be within the parameters of a recount, as the result could be within 0.25%, and by US legislature a recount is mandatory. The divide in the US remains strong, and will likely only be exaggerated by this election result.

Paris shootings: Death toll rising and many injured in the French capital