Remember Einstein’s notorious expression? “If the bee disappeared off the surface of the globe, man would only have four years to live”. Well, it might not be as surreal as one might think. 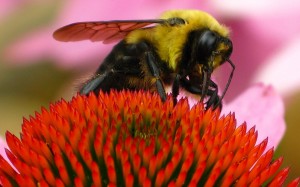 Scientists at the University of Reading estimate that Europe has lost over thirteen millions bee colonies, the equivalent of seven billion honey bees. It will prevent a correct pollination of crops in more than twenty European countries. In France and in Germany, only half of the necessary number of colonies is left. The case of the United Kingdom is even worse. It lacks three quarters of the essential number of domesticated bees and the British Beekeeper Association warns that we may lose all of them within the decade if we are not alert. This degeneration is even more immediate than global warming. Honey bee fertilization is indispensable for nuts, citrus fruits, apples, onions, tomatoes – and so many other fruits and vegetables –as well as coffee and cocoa. Nearly ninety percent of pollination comes from them. There would not be a lot left on our grocery stores shelves! Some solutions have been found. In France, in the Alpes Maritimes, a vast plan of modernisation has been set up in apian fields. Many acres of flowers have been planted and hives installed in national parks. However, these actions do not respond to the real outcomes of the integration of agricultural policies in the process of globalisation (international competitiveness).

Hyper-productivity and the expansion of consumption

In recent years, we have witnessed acceleration in the production of goods. It is mainly due to the advancement in transport infrastructure and a globalised welfare potential. The food industry has skyrocketed, resulting in huge augmentation in cattle and state-wide crops. Today’s farms are mostly monoculture ones, which require a lot of land, but the process of transporting bees over large distances to pollinate crops causes stress to them. Therefore, their immune system is weakened and parasites like mites expose the bees to main viruses. Monoculture farms also necessitate pesticides, because if a disease attacks, the whole crop can be infected. Forty-seven studies have been conducted worldwide, and each apprise of the neurotoxic effects of pesticides on bees. Amongst all chemicals is one that is highly used: neonicotinoids. It is a class of insecticides that is directly applied on seeds. Then they enter the whole plant and affect the leaves, the flowers and the pollen. Syngenta and Bayer, two biotech corporations, produce this substance, and they have recently been accused by the Corporate Europe Observatory of a “furious lobbying campaign” against pesticide interdiction measures.

In mid-2012, a series of letters were sent to the European Commission and the European Food Safety Agency by the European Crop Protection Association to protest the withdrawal of neonicotinoids. The ECPA is a lobby regrouping large pesticide producing companies like Bayer, Monsanto, BASF or Syngenta. The beekeepers were described as amateurs inappropriately using the products. Some of the letters were intentionally threatening; like the one personally wrote by Michael Mack, Syngenta’s CEO, to a European Commissioner, in which he stipulated his relations with various G8 members, and told the EFSA to “appreciate that they will consider Syngenta’s legal options”. Beyond menaces, these corporations are also accused of launching propagandist ideas. Some independent forums, such as the Humboldt Forum for Food and Agriculture, proved that insecticides actually contributed to European agriculture. Not so independent when you know that its partners include BASF, Nestle and various seed production lobbies, and that it is financed by Syngenta and Bayer…

Planting more flowers is definitely not such an important measure considering the enormity of the problem. The whole way of producing and eating food has to change. Directives need to be implemented to lower the influence of corporations on Food Safety Agencies. It is not yet too late. For instance, Swedish scientists have obtained a patent for a treatment to immunise the bees naturally. Made from bacteria located in the stomach of sane bees, it is said to be the only medication to reinforce naturally the immune system of the bees. Beauty might after all last in the eye of the bee-holder.