„Just because you are a character doesn’t mean you have character.” 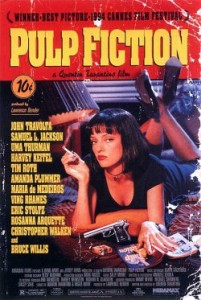 Can you think of a classic Tarantino without guns, gore, swearing and the obvious charm that reveals the film to be a Tarantino? No? Now think of the one and only Tarantino film. Did you pick Pulp Fiction? Cool. We all did and probably always will.

Pulp Fiction (1994) was in theatres when I was one year old. 20 years later I probably enjoy it as much as any 21 year old in 1994 did. It is a timeless classic and considered to be the most influential american movie of the 1990s. Next to co-screenwriting and directing it (of course, how else would it be a true Tarantino?), Quentin took on the role of an actor. He plays Jimmy, a friend of the movie’s protagonist and hitman Jules Winnfield (Samuel L. Jackson). Pulp Fiction won an Oscar for its script, and within the first five minutes into the film you will exactly know why.

We follow Vincent Vega (John Travolta) and Jules through the Tarantino universe. They are working on a mission by their boss Marsellus Wallace (Ving Rhames)who is married to Mia(Uma Thurman). Through a number of odd events and a bit of being at the right place at the right time, the boys’ timeline entwines with Mias, Butchs (Bruce Willis), a boxer paid to lose a fight and two robbers who are going slightly off-track on one of their gigs. Personally,I think this film is purely made to serve an entertainment purpose but there are people out there who think of the film as a deeper philosophy. Have a go at the google search for nihilism… Or if you can, go find Tarantino and have a chat about it.

In regards of how this film was made I can only point to the language. This film absolutely lives from dialogue only. The conversations Vincent and Jules have bring the whole aspect of cinematic language to a new level. Of course, the totally realistic blood, the enormous amount of swearing and the spot on soundtrack do its bits too.

There is no denying in that this is nothing but a Tarantino. He pulls us into the screen by every trick in the book.

One of the things to bear in mind while watching this is the fact that its title is ‘Pulp Fiction’. By definion pulp fiction is a certain style of book which was popular in the 1920s. It was cheap and generally considered to be too full of violence, sex and other immoralities. It was also seen as badly written. Someone on the web described it as something what is junk food for nutrition. What does that tell us about Pulp Fiction, the movie? Exactly. Its just awesome.

a-z, pulp fiction, tarantino
Recommended stories you may like:

A – Z of Films: Quantum of Solace